A friend of mine has been looking for a mig for a while now. Like the rest of us, he's on a tight budget.
All the bargains were getting snapped up before he could get a look in.
Then one day they re clearing out some storage that's been sitting a while and on a pallet sits a unimig 175 solid state mig/ stick welder.
Wire feed no longer regulating. One fixed low speed all the time.
Some sweet talking later and the mig is his. 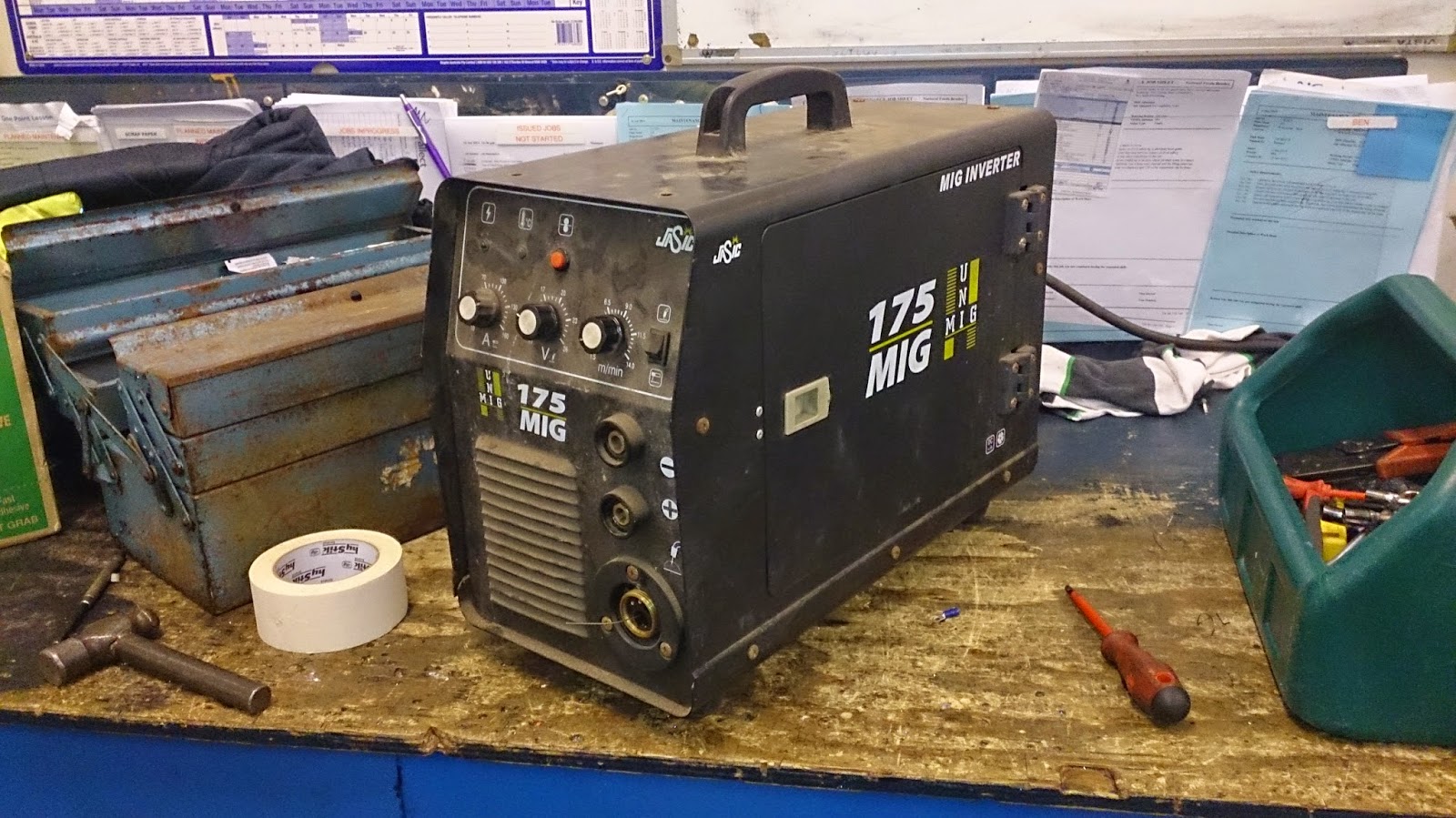 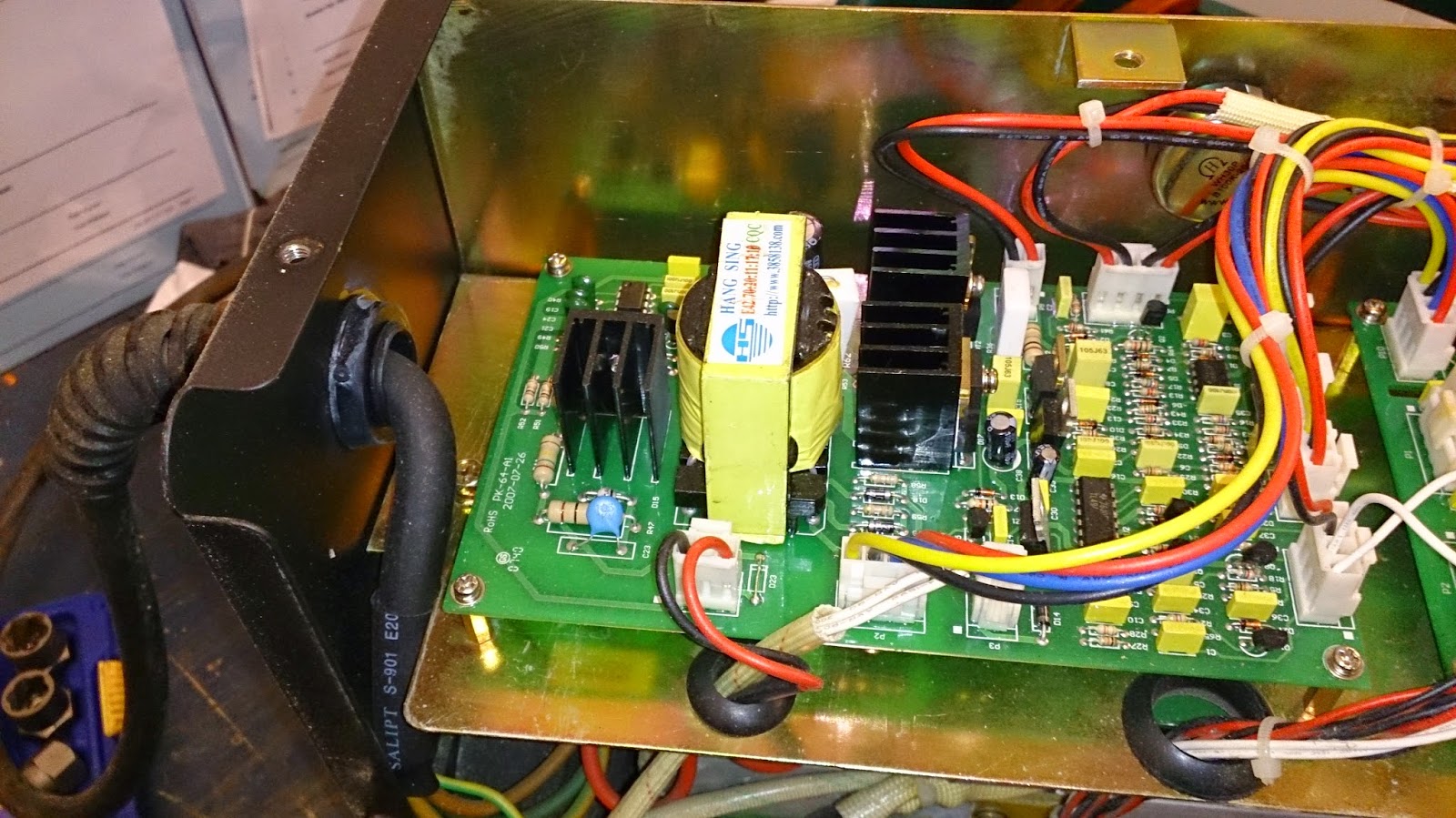 I got a PWM dc motor speed card for something a while back and decided to set up an alternative power supply and regulator for the wire feed. Bypassing the wire feed circuit while retaining the other functions of the card.
A 4A 24Vdc (I would have preferred 36Vdc) was sourced and its mounting location determined. there isn't a lot of space so i had to mount it in the wire feed side. 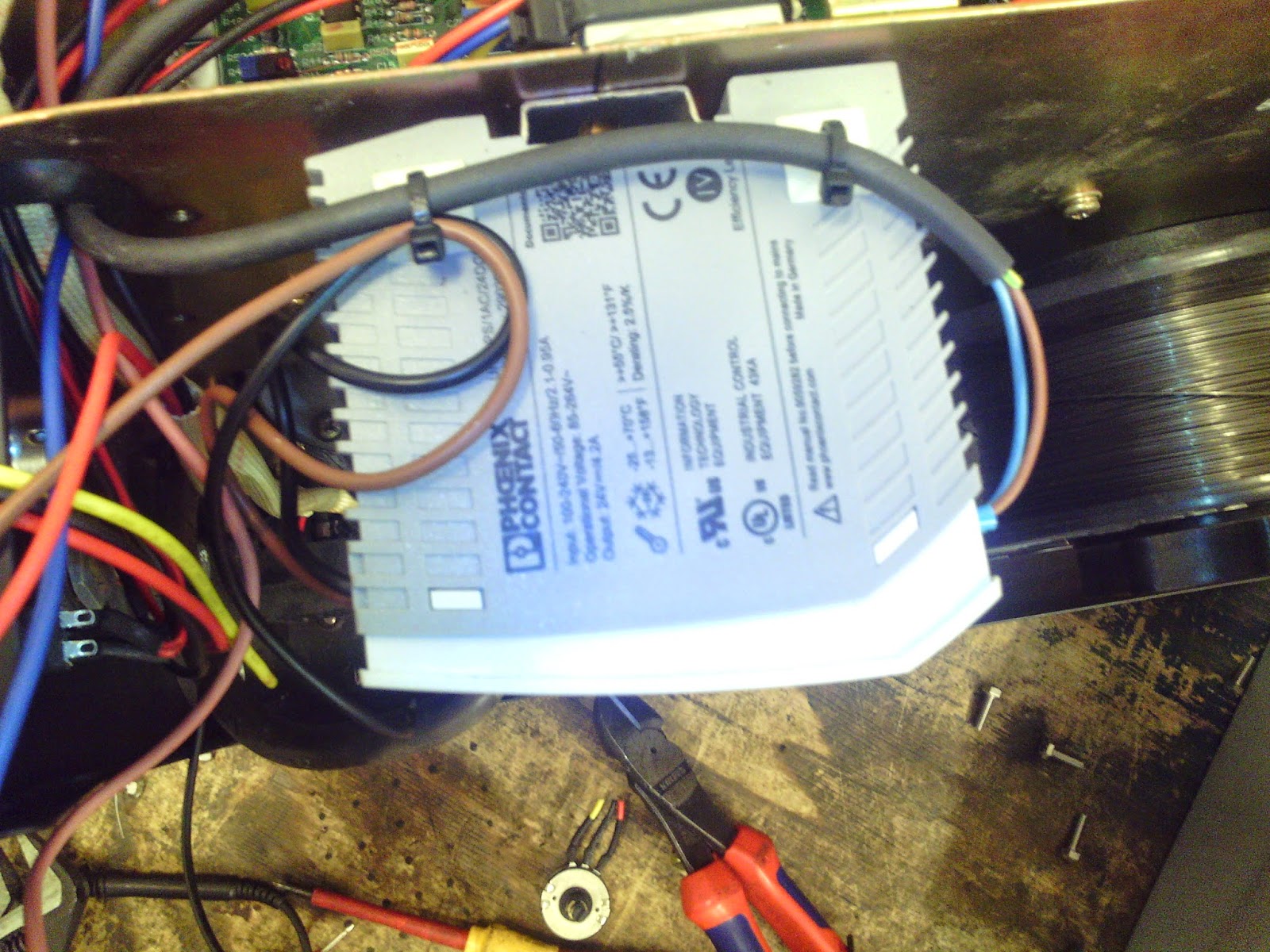 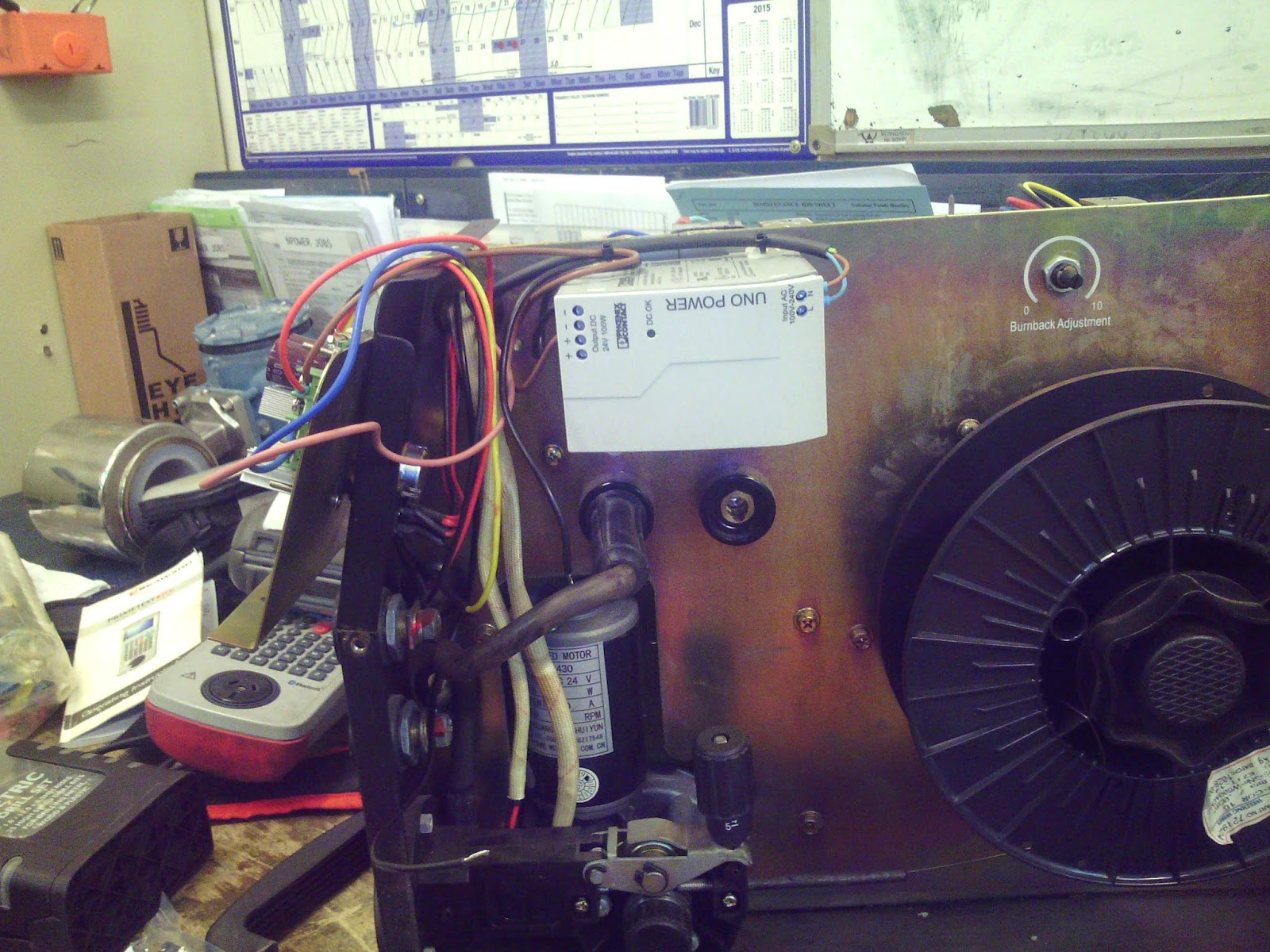 The PM was also squeezed into a tight location. The plate it mounts to was originally inverted and covers other pots and switches. 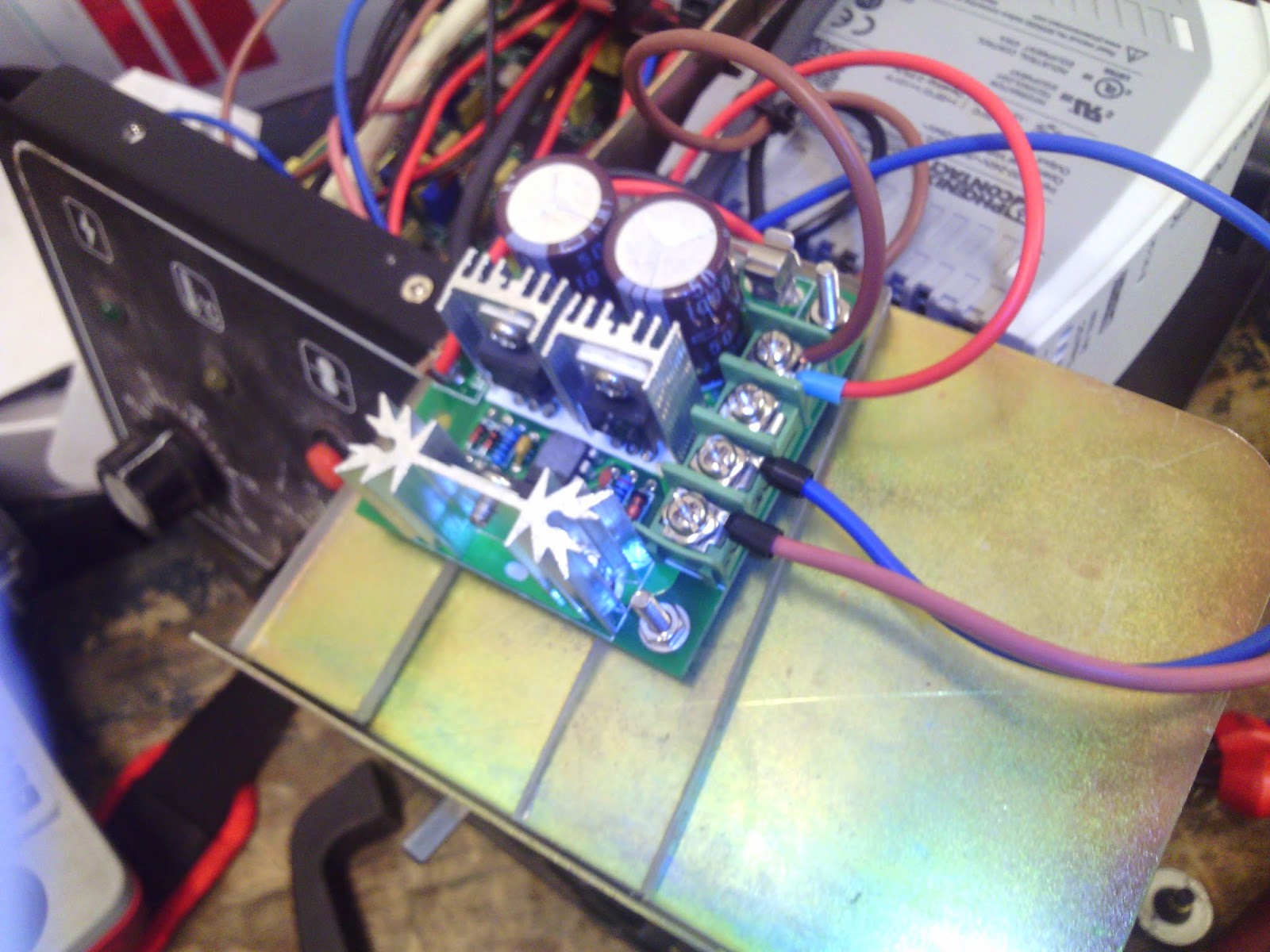 The torch trigger now activates a relay supplied by the 24Vdc. The relay triggers the original torch input on one set of contacts while the other are supplied from the output of the PWM card. This allows the wire feed to operate independent to the original fault but also keeps the gas and welding current control as original.

The SIP migmate series of welders are/were an affordable mig but they suffered from a terrible wire feed.

A friend of mine owns one and as I was bored and he wasn't using it he brought it over for some lookin.

To Robs mig i added a 1.5A 24dc power supply as a dedicated wire feed. this would stop the feed stepping up with the welding voltage and varying under load.


Also a relay to trigger it was connected to operate simultaneously with the welding current transformer. This is also arranged in such a way to short out the motor to stop it dead, over-running being oner of the little migs issues.I zip tied it to the heat sink on the card. 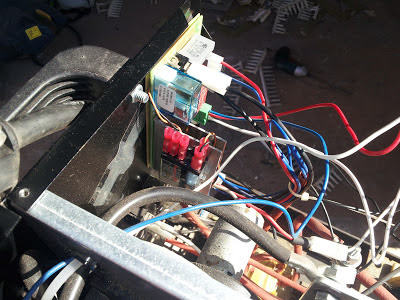 
Robs SIP has a metal feeder liner not the plastic one so that doesnt need upgrading. I would like to change the gas hose to accept a normal gas regulator and brace the wire feed rollers together as they do spread slightly when tensioning but Rob wants his mig back!

until the next one

EVERY single welding workshop has a lead like this. Go and look. 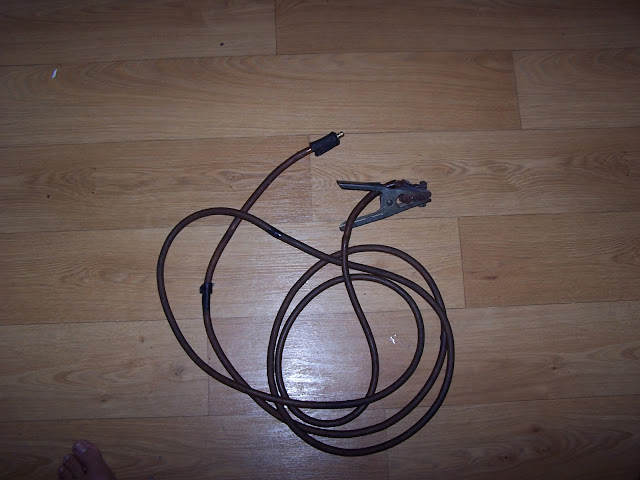 Blackened and horrible. But it still works so why fix it?
Volt drop, that's why. The damage on the contact points are creating a high resistance and dropping your voltage at the weld.
Welding is a Low-Voltage exercise anyway so dropping a couple of volts will affect your weld quality.

Usually not a big deal with MMA (stick) but fluctuating voltages will cause issues with your Mig welding especially. Ever had you welder not weld the same even though the settings and material are the same?

The effort spent cleaning the work piece is wasted if the clamp is this dirty. 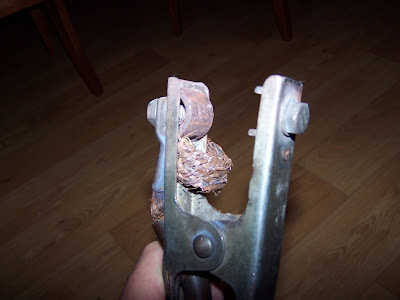 In this case also the lug connection on the clamp end is slightly loose and corroding as is the cable.
The Dinse plug on the end is very worn and will also result in the voltage drop mentioned earlier. 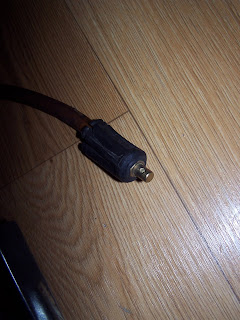 This is now 3 points on one lead that have a drop. It ads up and can affect your finished weld. Its also likely that the torch end has enough problems to overcome without the earth adding to them.

In short, keep your connections tight and your contacts clean.

Triker Chewie
refuse to obey "do not open, no user servicable parts inside," labels. i pull apart $100k machines for a living so screwing around with something at home that is already broken aint no stress. Buying stuff that other people have decided is broken has done me well. I'd rather fix old shit then new shit